Abortion - Life and Liberty for Women

Our Educational Boards Life and Liberty for Women Does It Differently

Small – they blew over in a strong wind – but we tried! Though small it intrigued abortion opponents who traveled with JFA-Justice for All - an anti-abortion group out of Kansas who had on the Colorado State University Campus their own display – a 18 foot high steel girded display of alleged aborted fetuses. 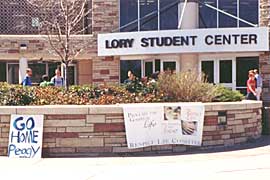 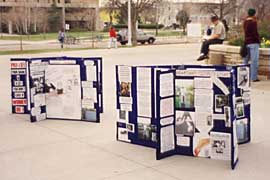 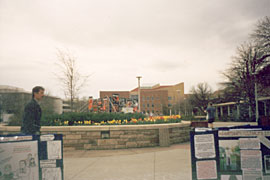 Those words were on a sign that was displayed on Tuesday April 23 outside the Lory Student Center on the Colorado State University Campus by a local anti-abortion group very familiar with me and Life and Liberty for Women, The Larimer County Right to Life – Rosemary VanGorder to be precise.

The week of April 22 saw the anti-abortion extremist group “Justice for All: Students for Bio-Ethical Equality” from Wichita Kansas, set up their 18 feet high steel colored graphic pictures of alleged aborted fetuses on the Lory Student Center Plaza.

Life and Liberty for Women found out the previous Thursday when Jessie Danielson at Colorado NARAL called and informed us they had received an anonymous tip about their arrival. We, as was NARAL, were unaware they were coming. Life and Liberty for Women worked hard over the weekend to put together our display in response. While we don’t have the hundreds of thousands of dollars JFA does, we constructed a much smaller but as it turned out, equally as powerful graphic display about the sights of illegal abortion. We had an extraordinary amount of facts displayed on our boards about the truth about the safety of legal abortion, the alleged link between breast cancer and abortion, the deceptive nature of their pictures, God the Bible and Abortion, (see our web site ISSUES IN DEPTH article) second and third trimester abortions, adoption as a viable option but one not without potentially harmful consequences, and how considering quality of life issues for the potential life they carry are not “frivolous” reasons for women to terminate pre-viable human life.

Scores of people thanked us everyday and expressed their gratefulness that we were there with our graphic presentation and information in response and most importantly, while the anti-abortion presentation was considered sensationalism at its worst presented only for the shock value, our presentation, though graphic, was considered educational by all who observed it. While I would have liked our presentation to have been a little bigger and certainly on material that wouldn’t blow down in the wind, it was apparent from the amount of information we had on our boards and available for people to take, our purpose was not about shock value or sensationalism but rather it was about education.

Abortion opponents that were visiting from Focus on the Family and a Christian school in Denver and even those working for Justice for All, came over to view our presentation. Most telling? These individuals came back several times during the day to read, re-read and even write down what was on our display boards. They were taken aback by the information about illegal abortion and the graphic pictures of illegal abortion which few, if any, had ever seen. They were livid about some of the information they were reading particularly about God Bible and Abortion and the stories and statistics about illegal abortion. They debated me and became even more frustrated.

Life and Liberty for Women has long thought that standing up for abortion rights in this manner not only stuns anti-abortion extremists and gives them something to think about, but it is welcomed by abortion rights supporters hungry for a braver more aggressive response and defense of a woman’s right to make a decision about abortion based on her own set of religious and moral values.

While our resources were limited there’s no doubt in anyone’s mind that our week on the CSU campus going toe to toe with anti-abortion extremists and their propaganda was most successful. There’s no doubt it was frustrating and irritating to anti-abortion extremists who had not anticipated such a riveting bold challenge to their presentation using their own successful tactics. There’s no doubt too, that our response was educational, reassuring, exhilarating, and motivating for our supporters! Their comments about that were unequivocal!
Hundreds of young post-Roe individuals saw for the first time exactly what it is they don’t want to go back to and for the first time they could immediately compare and contrast that information with the displays of alleged aborted fetuses and anti-abortion propaganda.
IT WAS POWERFUL!

These two Justice for All representatives spent a great deal of time reading our materials and debating me. Finding me a worthy opponent they wanted to pose for a picture with me on the last day they were at CSU. Life and Liberty for Women’s presence and material was unexpected and something they weren’t use to encountering. 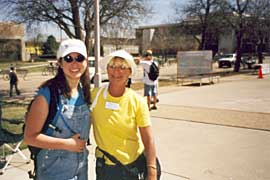 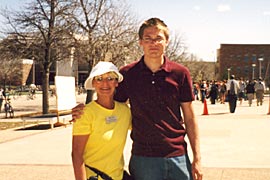 October 2002 Colorado State University Fort Collins, Colorado
Justice for All returns to CSU but this time Life and Liberty for Women, thanks to my husband, Jim, now have three 4X6 wooden tri-folds and five 4X3 wooden sandwich boards! 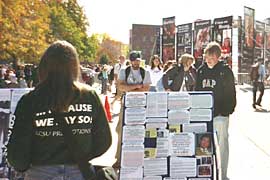 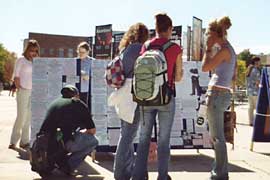 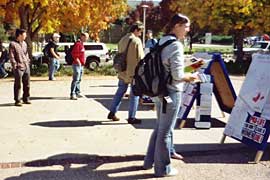 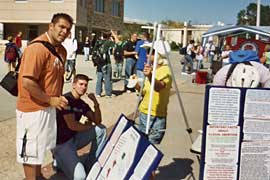 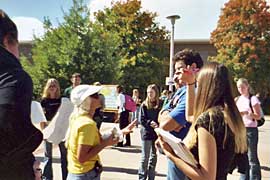 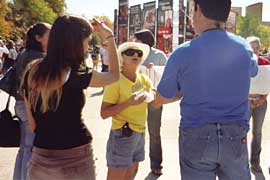 This time Justice for All chose University of Colorado at Boulder to bring their 18 foot high steel girded display of alleged aborted fetuses and was surprised that Life and Liberty for Women responded to their display at CU. 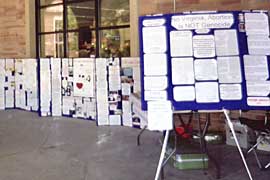 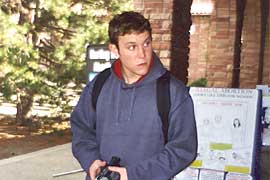 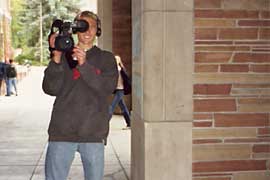 This time, in addition to debating me, JFA members took pictures of our display and videoed our display. What an honor!!  One “pro-life” woman, a student at CU, told me that while she disagreed with Life and Liberty for Women, it was the best pro-choice display she had seen!

Here two CU students associated with the anti-abortion anti-birth control so-called crisis pregnancy center on campus are unhappy reading about how crisis pregnancy centers like theirs aren’t honest with women about why they want them to have an ultrasound. Our educational board talks about how they pull a bait and switch with women. They don’t tell women the reason they want them to have an ultrasound is because they think once they see their baby they won’t want to have an abortion, instead they tell women that the ultrasound is just so they can date and verify the pregnancy. We also challenged these centers refusal to notify parents before they hook a minor girl up to the ultrasound to “guilt” her into becoming a mother. These young girls are being confronted with the truth about what they do and how they do it. The truth they didn’t want to be confronted with. 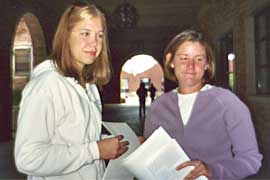 This is a day in October in which we remember Rosie Jiménez, the first woman to die as a result of legislation barring federal funding for abortions for low-income women. Known as the HYDE Amendment (after IL anti-abortion representative Henry Hyde) the 1976 law bans the use of federal Medicaid money to pay for abortions for poor women. On this day no anti-abortion groups are to be found on the CSU campus. It’s a chance for Life and Liberty for Women to do some real positive educating of young women on campus. 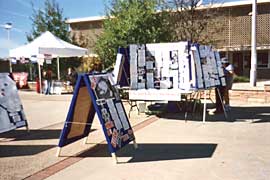 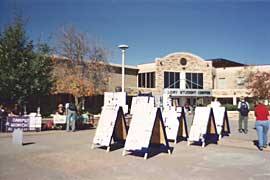 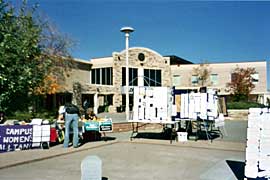