Abortion - Life and Liberty for Women 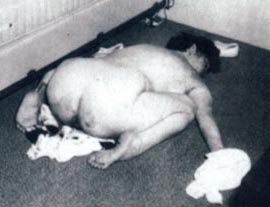 The name of the woman pictured below is Gerri Twerdy Santoro. She was just 28 years old. She was a sister, a daughter, and she was the mother of two daughters when she died a very painful and frightening death.

This New York coroner's picture first appeared in MS Magazine in April 1973. When Gerri's picture appeared in MS, no one knew her name or all the circumstances that surrounded her death from an illegal abortion. While it was assumed that she died at the hands of a back alley butcher, the family later confirmed that she died the way most women died before Roe vs. Wade legalized abortion in this country in 1973; she died from a self-induced illegal abortion.

Gerri was estranged from her abusive husband when she met Clyde Dixon and became pregnant by him. Terrified that once her abusive husband returned to town and learned it was Dixon's baby she was carrying, he would kill her. She was determined and desperate to end her unintended pregnancy. That desperation and determination made her akin to thousands upon thousands of women in those days that were desperate and determined enough to terminate their unintended pregnancies in spite of the fact that abortion was illegal. Illegality affected the safety of abortion but it never affected the number of abortions that were performed

Gerri was 6 ½ months pregnant in June 1964. Gerri's boyfriend obtained a medical book and borrowed some surgical equipment. They went to a motel where Dixon tried to perform the abortion. When the attempt failed, when it all went terribly wrong, Dixon fled the scene, leaving her there to die, alone, in this cold impersonal hotel room. She was bleeding profusely and tried with towels to stop it but she couldn't. How frightened she must have been, knowing she was going to die. She was found like this, on her stomach with her knees under her, her face not visible, bloody, nude, alone and dead.

Two lives were needlessly and sadly lost here. This horrible sad picture of death makes clear that illegal abortion not only harms and kills women, it doesn't "save babies." There's a better way. Legal abortion and reducing unintended pregnancies will reduce the abortion rate without endangering women's lives.

If abortion is made illegal again, the first thing we'd see is black market RU-486. That would become one of the main new instruments of self-induced illegal abortion. RU-486 is a safe method of medical abortion, but just like surgical abortion that is safe when it's legal, they both would become dangerous and deadly in the underground.